So here it is, a little late, I know, but I’ve been covering the Women’s Cricket World Cup for Women’s Sports UK and haven’t had a minute!

The World Cup group games have now finished and the semi-finals start tomorrow, so this is my fleeting window of opportunity to tell you about our latest fab session of netball.

Low numbers this week so, in effect, we had to work twice as hard! Prepare yourselves for some pretty out-there diagrams as I try to describe what we did.

Warm-ups as usual and then running round the court bouncing the ball basketball style I must admit I found this quite difficult – I can run or I can bounce, but I can’t do both at the same time. I’m ok on passing while running which we do as part of the warm-up, but bouncing not so much.

Anyway, I was quite relieved when this finished and we were on to the “proper” drills.

I love the way Val builds up a drill. So, first you only have to remember one component, then she adds in another and another until by the end your mind is awash with things to remember and you’re concentrating so hard you feel you might explode.

I know women are supposed to be good at multitasking, and generally I am, but doing this I did find I kept missing one or other of the components. It didn’t help that couldn’t remember which way I was supposed to me running! Let me show you what I mean:

Classic. A diagram like so much spaghetti. See what I mean now?

Actually we started by running with the ball rather than passing it straight away – an alien concept in netball which felt really weird to do.

Drill 2: Same running to catch the ball but standing still and passing and remembering to turn your hips to face the person you’re passing to.

Drill 3: same + hips + jump to catch the ball – so footwork again, knowing which foot you’ve landed on and turning to face the person, and passing.

Drill 4: Same + hips + jump + step forward on correct foot and push the ball out in a pass.

And finally, my nemesis

Drill 5: same + hips + jump + step forward + (and this is the killer) when you run you have to stick your hand out to signal where you want the ball, as if you’re hailing a taxi. Several times I reached my catching point, but no ball was forthcoming as I had not signalled for the ball and we were under orders not to pass until we had received the signal.

Wow! Just ever so slightly bushed after all that, but we all got it right in the end.

Next we went on to some team of two work:

Good fun this, except for the fact that I’m allergic to shooting (I may have mentioned this already). So on reaching the end I passed to my partner, Ruth. Unfortunately she passed it back to me. First pair to five wins. Four-all and it’s our go to see if we can take the game. Now Ruth is a much better shooter than I am but it’s my turn to shoot when we get down the end. I would like to pass it to her, but I’m told by Val that I have to shoot. I immediately apologise to Ruth as I know I’m going to miss. And what happens???

I miss, that’s what.

The game is lost and it’s my fault. Ruth is unperturbed but my competitive streak causes me grief. I try to swallow the hurt the best I can and move on…..

Warm down and time for a group chat.

Val is pleased with the progress we’ve made over the last weeks, but the next session is due to be the last of the programme. Boo.

So what happens next? At the time of writing I’m not sure. We discuss it and agree that we’d like to carry on. We wouldn’t have a coach, but Val would leave us copies of the drills and we could carry on on our own. Val brought the equipment – balls and bibs – with her, so that would be another consideration, as would the hire of the hall.

We’d love to keep going, but you’ll have to wait until the next instalment to find out what is decided!!

Obviously, if we are going to carry on we would like to invite new members. If you are in the vicinity – Market Harborough, Fleckney, surrounding villages, dare I say it – over the Northants border – and you’d be interested in playing, please get in touch. We’re a friendly bunch. We don’t take ourselves too seriously, but we do love a good game. You can contact me through this blog. At the moment we meet on Fridays 6.30-7.30pm at Fleckney Sports Centre.

So, there I was on tenterhooks waiting for the new day and date for the start of the netball sessions, hoping that some arrangement would have been agreed.

I received an email from Emma telling me that the sessions would now be on Fridays at 6.30 and the first one would be Friday 5th February. Hurrah! No, hang on a minute, boo! Typically we had booked a cheeky night away in London on – you guessed it – Friday 5th February. I was gutted. I was going to miss the first proper session.

It seemed as if every time I tried I was thwarted! But I was determined to go the following week.

There were about seven of us – only one team’s worth, unfortunately, but hoping it will grow. I was much gratified to find that those who had come the previous week had returned – always a good sign! There were also another couple of newbies so I wasn’t the only one.

We started with a light jog round the sports hall and some stretching and then straight into drills. Wow. It was a mixture of remembering things and getting back into the groove and realising how completely and utterly rubbish I was.

I think we all loved the drill that had us in two lines passing the ball to each other and running round – it’s hard to explain in words – here’s a ridiculous attempt at describing it in a diagram:

Much hilarity ensued, especially when we graduated from making our way down the court to round the corner and making our way back the other way. Many instances of people with the ball with no-one to throw to and people waiting for a ball that never came! Still, I think we’d made progress by the end and you could see the look of determination to get it right on every face.

Then we came to my personal low point. At this juncture I probably ought to confess something – I am terribly competitive. Be it Trivial Pursuit, Top Trumps, badminton with my husband, I hate to lose. That’s probably why I’ve always been more interested in defending than attacking. Never wanted the goal shooter glory – just stop the opponent scoring at all costs……

So Val set us up in the following pattern: 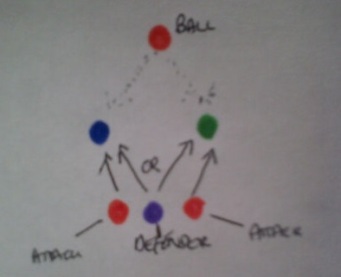 The idea was that the defender in the middle had to choose which way to go, which person to mark. The person at the top would stand with their back to play, turn round and shout “now”. The two attackers would run to a spot, the person with the ball would pass it, obviously to the unmarked person. Now I got that. I really did. Then it came to my turn to be the defender and I lost it. I confess, the instructions went out the window.

Hmm. Not quite what Val intended – as she told me in no uncertain terms. What did she expect me to do?   When I went with the person who was not getting the ball I was duty bound to switch to the other person to prevent them getting it, wasn’t I? No? Oh. Eventually I got it, but it felt alien, silly and downright wrong…..

Anyway, still smarting from my ignominious telling off we went on to play a tentative half-court game with no positions just pairs of markers. We all had a go at shooting and what was brilliant was that there was already a sense of camaraderie – it took some of us quite a while to score but there was universal cheering and clapping when each goal went in.

We ended with another gentle jog for warm-down with lots of stretching.

I cannot pretend I was not absolutely cream-crackered by the end of it, but loved every minute.

I’ve had a couple of weeks to recover now (half-term in Leicestershire last week) but I’ll be back in action on Friday.

And I’ll be back with more tales of the next session, and hopefully some photos next week.

One dot on the card!!